Dancehall artiste Shenseea has set Instagram ablaze and stirred controversy after she released some scorching photos of herself in a very modified police uniform, one that will surely not be used by the Constabulary Force in Jamaica.

It seems she intends to prove that she is hotter than Wasabi. The tight navy blue suit by Romeich Wear is accentuated by Shenseea’s coy smile and playful attitude in the photos.  They appear to be from her latest video shoot.

The Blessed singer captioned the series of photos today, “DO NOT RESIST” alt=”” aria-hidden=”true” />

Ladies and Gents…I promise to serve you wa u can do fi yuhself”. 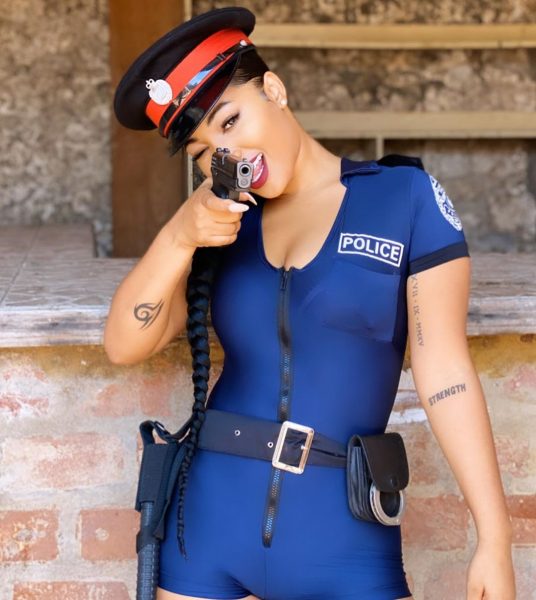 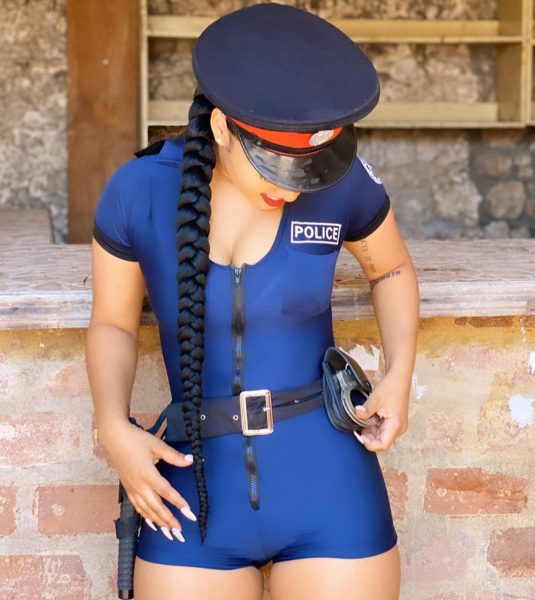 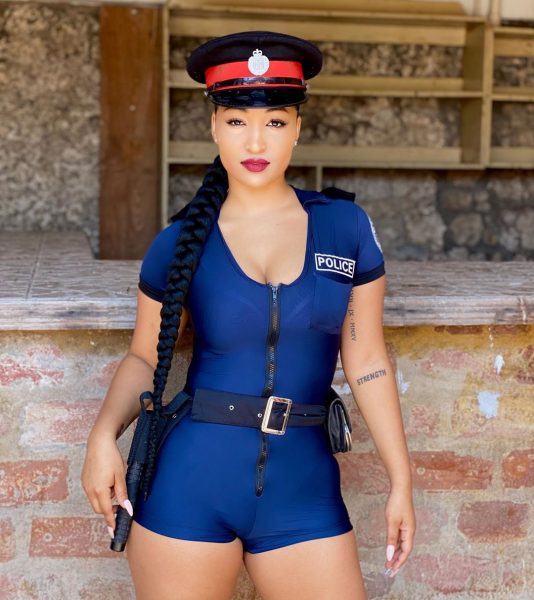 Several of her fans, many of whom seem based in the US, did not appreciate the sexy photos because of her use of a modified police uniform. These fans argued that because of the recent death of 46-year-old George Floyd at the hands of police in the US, the photos sent the wrong message and was shared at the wrong time.

Floyd lost his life on Monday, May 25, after police apprehended him in Minneapolis. Multiple video footages of the incident showed one of the police officers refusing to remove his knee from Floyd’s neck despite pleas from the man and the several bystanders who witnessed the shocking event.

Shenseea’s manager, Romeich, jumped in comments under the photo to defend the sultry Shenyeng Queen.

The back and forth started with this fan’s comment: “Wrong time to post this right now. Especially with the senseless violence of police officers.” Another fan supports the comment and added: “that part it’s a time and place for everything…& this right here, definitely wasn’t the time smh.”

At this point, Romeich intervenes and said: “she is on her video shoot u cant say wrong time to post a pic not because you have police doing wrong that mean that all cops are wrong and evil careful of how u pree things thats goes to you as well”

He continued, “It’s a painful time for us black people but her work still goes on and we will continue to respect the good cops.”

However, it seems that his words were not enough to calm some fans as another incensed fan replied: “you all need to acknowledge that this is done in poor taste nobody is saying she doesn’t look good or we hate her, but a man was literally just killed by a police officer in broad day light just like so many others before him.”

“For her to post something like this is done in poor taste because I am sure if you had took the time to just open social media you would’ve seen it everywhere”, she said.

“I’m not saying stop her bag, and she doesn’t have the right to make money or do her job but it’s incredibly insensitive for her a person of colour a artist I myself looks up to a mother to a young black man to post something like this right now it’s inappropriate unnecessary”, the fan added.

“This don’t sir right with my spirit! Delete this while you still have time”, another fan said.

“You look cute but this is a little tone deaf in light of that man that was just murdered by the police because they lied and said he was resisting arrest,” one woman said.

“This picture … right now…. in the climate we are in? During all the emotions our black community is feeling…. okay”, another commented.  While another added, “This is the wrong time for you to post this, especially the caption”.

One angry follower said, “This post is in very bad taste given the current events in Minneapolis. You can’t be this f—— thirsty for likes #unfollow”.

Even though many fans felt the post was bad taste, others indicated they loved her look and encouraged her to keep working hard.

She also got a thumbs up from labelmate Ding Dong, Ce’Cile, and Trinidadian songstress Nailah Blackman who commented: “Blue looks fire on u.”

In the end, Romeich once again commented and told fans that not only did he support his artiste, but he was not taking the photos down, especially since it’s a Jamaican police uniform in his opinion, they were not responsible for the unfortunate death of Floyd in Minneapolis.

D’Angel snaps when asked if her son has subscribed to her...

D’Angel snaps when asked if her son has subscribed to her...