Bobby ‘Digital’ Dixon, one of the country’s most influential music producers was on Saturday remembered as a gentle giant who made an invaluable contribution to nation-building especial in the music industry.

Thanksgiving service for Dixon was held on Saturday, June 27 at the Pembroke Hall High school, in Kingston, where mask-wearing friends and family joined Minister of Culture, Gender, Entertainment and Sport, Olivia Grange, to pay final respects to the late world-renowned musician. 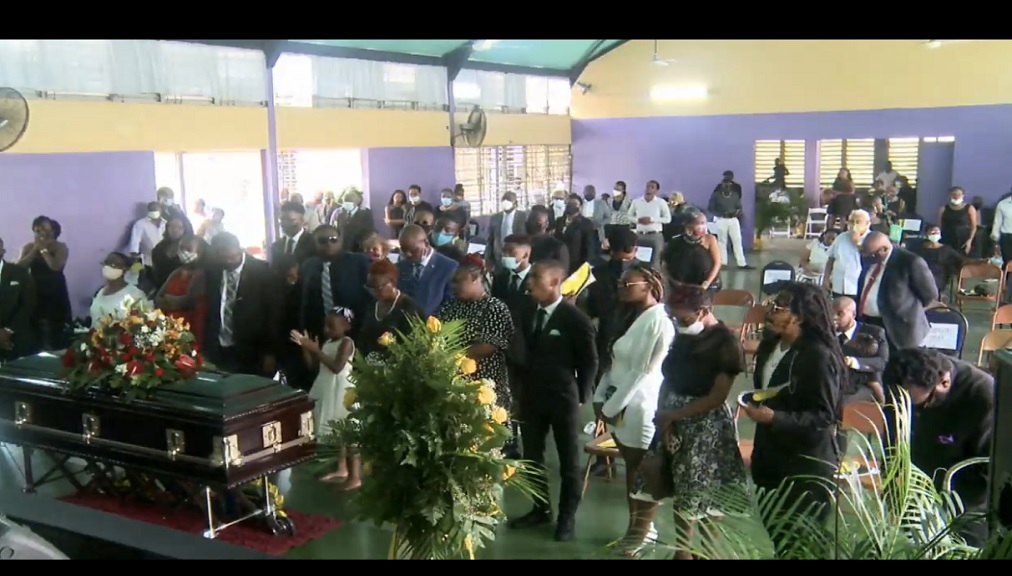 At the start of the thanksgiving service, the location of the event was withheld from the public because of the COVID-19 restrictions.

Singers such as Lukie D, and Richie Stephens paid tributes with emotional songs but it was a montage of personal photos of Bobby and his family members set to the music of Gramps Morgan’s ‘There’s a Place for People Like You’ that struck a chord with the congregation to a degree that some openly wept.

There were also tributes from family members, and recollections from friends that invoked humour and offered a glimpse into the daily life of the iconic producer.

Trudy Dixon-Smith, daughter of the late producer, in her tribute said her father was a humble man with character.

“My father was a friend to so many, he respected his friendships, and he was humble and always remembered where it started. He remembered Mr Evans who gave him $10,000 to buy the house at Hughenden and Chris Chin who gave him the money to buy his first mixing board,” his said.

She shared that Dixon always made the time “to carry us to school every morning, that was his time with us, he was my brother’s teacher, and my dad loved his grandkids”.

“I won’t hear my phone ring and see his photo and the words Daddy come up,” she said.

The officiating minister at the service also spoke about Dixon’s dedication to his children.

“Death cannot separate us from the love of God, I have done many funerals and there is no home going service that is easy to preach. But when Merva asked me, I had to do it. There is something about a father’s love, God bless you all, some of you have to be both mother and father, but Bobby was a father, I don’t have to go over the testimonies,” the preacher said.

The preacher assured all in attendance that Dixon was resting in the arms of the everlasting.

Dixon passed away on Thursday, May 21 at age 59. He reportedly succumbed to a kidney-related illness.

Dixon who was given his nickname “Bobby Digital” by a friend and colleague Bunny Lee was originally from Olympic Gardens in Kingston, Dixon was a protege of engineer/producer Lloyd “King Jammy” James with whom he started his career as an audio engineer.