After clearly examining Chronic Law’s Talk Facts diss track, Jahmiel scores an A+ in Comprehension Skills with his return Quaran Kill that was just released today April 22nd on ItsJahmielVEVO.

The torrent of diss tracks from the two dancehall artistes kicked off when Jahmiel dropped Dead Xample, on April 13th.   Law released Pree on April 14th, which was re-engineered to be current, and countered some points raised by Jahmiel.  Round 2 saw Jahmiel reaching for a 357 on April 17th, while Law questioned his opponent’s relevance in Relevant on April 19th.  Jahmiel addressed Law on a first name basis in Chip Glock on April 20th, while Chronic ended Round 3 and counteracted with solider-like militancy in Talk Facts on April 21st.

Now today, in round 4, Jahmiel has a more serious comeback.  Quaran Kill is an assassination of words slaying the Law Boss, while countering the disses that were thrown at him and issuing some direct punches at Vybz Kartel.  It’s only fair as Law dissed his MVP affiliates Mavado and Alkaline in Talk Facts.

In the most talked about verses of Quaran Kill, Jahmiel sings “Mi powerful suh yuh need help’.  He continues “hombre can’t save yuh, weh a back fist in a fi him cell”.  This is a response to an Instagram post by Vybz Kartel, made yesterday, in which the incarcerated deejay sided with Chronic Law and hailed Talk Facts as a potent diss track. 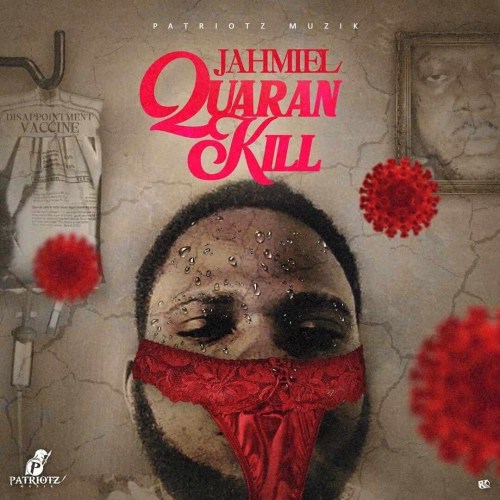 Quaran Kill’s cover art shows Law taking the necessary COVID-19 precautions but instead of a recommended cloth mask, the deejay is pictured with a female’s underwear.  Also in the graphic, a rather unflattering selfie portrait of Vybz Kartel in prison hangs on the wall.  Alkaline’s friend and producer Gego Don had tweeted the prison photo on April 20th after Kartel responded to Alkaline‘s highly disrespectful single, Nah Fi Like.   Alkaline took another shot at Kartel by sarcastically asking Gego Don if “he’s alright?”, and later adding that Kartel looks nauseous and “wants some ginger tea”.

Moving on, the Patriotz trailblazer is sticking to his word and insists that he is ‘talking facts’, first stating that his claims of Law’s rape case is in fact true. Actually he has evidence “dem catch him and Bashy (Law’s bestie) pon a naked flim” and also explains that is the reason why he is unable to travel. While there is evidence of the Hillside deejay visiting neighboring islands for stage shows, we’ve not seen any international (visa approving) performances from him.

Even though keeping his disses a little tighter in this round, Jahmiel drops even more ‘egg’ related jabs: head ‘cracking’, grenade pull and ‘scramble’ a guy, launching his metaphorical skills like a real class act yet not cracking under pressure, after all Law did call him out for his nursery rhyme disses.

The Strongest Soldier deejay distinguishes him self as untouchable at this point in the clashing of this war, as he easily responds to the Law Boss disses. “Our badness overshadow satan, 6ix cya carry him dem need 8 man”, he says exemplifying his superiority with some underlining fat shaming.

In ending, firing even nastier shots as if wanting to draw out Chronic Law even more, he brings his child and mother into the mix then drops a small reminder telling his opponent “A me mek yuh current memba a nuh socket”.

Quaran Kill has definitely earned a comeback from Law, it’s really just a matter of time as we’ve seen these two deejays demonstrate a new talent in timeliness like nothing anyone has ever seen.

Check out the official audio for Jahmiel’s Quaran Kill below –

‘Since when you wash dishes?’: Lisa Hanna is just another sceptical mother

“My Heart Broke and I Blocked Out”, Beenie Man Explains Why He Fainted At Mom’s Funeral

‘Since when you wash dishes?’: Lisa Hanna is just another sceptical...

Man wanted for eight murders cut down by police

“My Heart Broke and I Blocked Out”, Beenie Man Explains Why...

‘Since when you wash dishes?’: Lisa Hanna is just another sceptical...

“My Heart Broke and I Blocked Out”, Beenie Man Explains Why...