Ishawna has announced that she is the first Dancehall artiste to receive a Covid-19 vaccine. On Monday, she shared what appears to be a vaccination card with her name in a boomerang on her Instagram Story.

The document which many have referred to as having the value of a passport- a vaccine passport- is used to show that a person has received a vaccine and may even be required to be used for traveling purposes. “Please keep this record card, which includes medical information about the vaccine that you have received,” the slip of paper with Ishawna’s real name read. The paper, which was not captioned by Ishawna, was recognized by Instagram’s built in fact-checker that adds automatic covid-19 links to posts concerning covid.

While many refused to believe that she received the vaccine, Ishawna is resident in the United States with her son, whom she shares with dancehall deejay Footahype, so it is possible that she has been vaccinated. 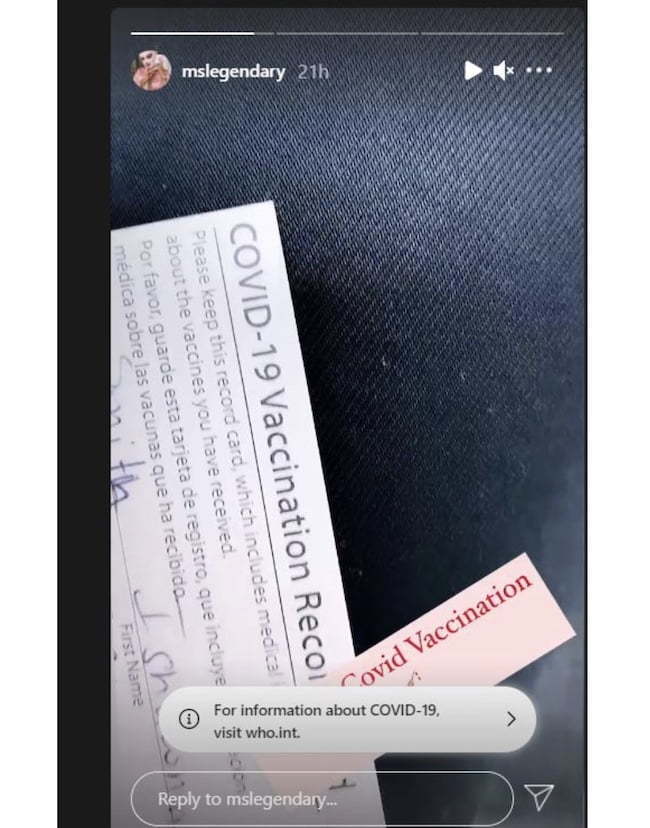 So far, CDC records show that 14.3 million vaccine shots have been given. Almost a million shots are given daily as the United States seeks to mass vaccine its population, which has seen more than 24 million persons infected and 400k persons dying.

There are currently two approved vaccines being distributed, but it was unclear whether Ishawna received the Moderna or Pfizer vaccine. Ishawna is the first among the dancehall community to show support for the Covid-19 vaccine, while others have expressed fear and uncertainty. The vaccine is being touted as necessary to stop the spread of the Covid-19 pandemic.

Health workers and the elderly are among the first to receive the shots before the general population is inoculated. Meanwhile, Jamaica is not expected to receive batches of the vaccine until April, and even so, medical workers and the elderly who are particularly at high risk for infection are a priority for receiving the vaccine. The vaccine is given in two shots in order to be effective.